You probably know that a rapid load time of a website is one of the essentials for good user experience and search engine optimization. You may have already heard something about boosting your page speed by using lazy load for images. But have you ever asked yourself how you could speed up your WordPress site if you did the same with your ads?

In this tutorial, I will show you how to implement lazy loading for adverts and how it can affect revenues and page performance.

What is lazy load?

Lazy load is a technique that defers the loading of an object until it appears in the visible area of your visitor’s browser. This feature is used by plugins like WP Rocket to implement images or videos on websites without ruining their page speed.

Advanced Ads Pro also provides a lazy load feature, but it’s not limited to images and videos only. It can be used for all kinds of injected content and is available as an option in the settings of all ad placements.

Why should you load single elements later than other? Lazy load can be helpful for page speed optimization, to save your visitors’ bandwidth and to improve the user experience. Since its effect is objectively measurable, search engines might also honor your improved page speed.

Ad networks like AdSense don’t load simple image files only when you inject their code. These ads call an external domain to load multiple files, perform checks, track impressions and finally show the visible ad content on your website. This process is repeated for every individual ad. 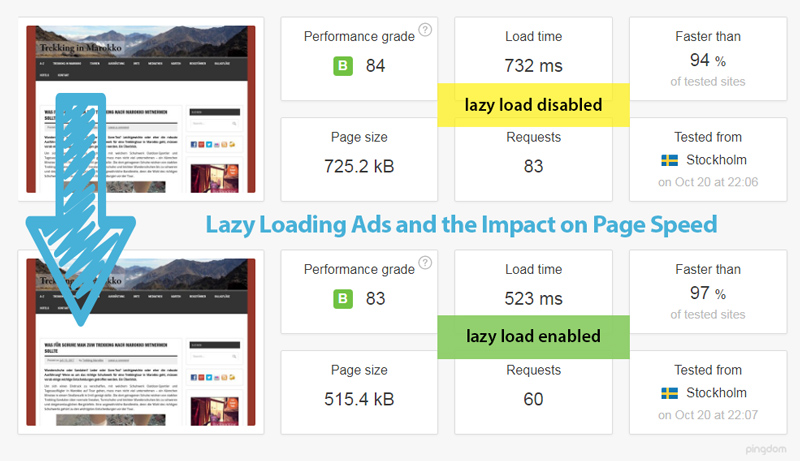 Some webmasters try to double their revenues by injecting more ads. In my experience, it’s not worth it. The visitor’s attention span is limited and won’t increase with a higher total amount of ads. The only thing that increases for sure is the load time of your website.

As you will see in the following example, a single AdSense unit increases the load time of a page between 140ms and 200ms. Can you estimate what happens to your page speed if you’d inject a dozen of such ads into your site?

The effect of lazy load on page load time and revenues

The following mini case study illustrates how the thoughtful use of Lazy Load can result in better performance and higher ad revenues. The example page was already optimized with the plugin WP Rocket before I started to analyze the impact of the lazy load.

There are two AdSense units which are placed under the page header and at the bottom of each article. You can also see some affiliate links in the content area, and several self-hosted image ads in the sidebar.

In the following, I will focus only on the AdSense unit at the post bottom, because there wouldn’t be any advantage in enabling lazy load for the header ad which is placed above the fold.

I used Pingdom to measure the page load time and ran a dozen tests for this case study. The average load time of the already optimized page was about 740ms. After enabling lazy load for the post bottom ad, it dropped below 540ms.

An improvement of 200 ms does not sound earth-shattering, but that’s a load time boost of more than 25%. Achieved by just delaying one single ad unit. Keep in mind that the more ads you are injecting into your page, the higher is the impact of lazy loading them on the load time.

Lazy load, ad revenues and what you should pay attention to

Besides the positive effect on the page speed, I noticed better Active View rates of those blocks with enabled lazy load feature. This improvement can result in higher ad revenues for Active View campaigns in AdSense.

If you sell ads per impression, please pay attention to the fact, that deferred loaded ads will get tracked only if they are displayed on the page. Very eager users who rarely reach the end of your articles won’t trigger such an impression. So you should expect a bit lower number of ad impressions when using lazy load than you would estimate based on your traffic.

But that does not have to be a disadvantage. There is no better argument in the current debate about ad fraud, bot traffic and unreal viewability than using lazy load for ads and not selling bloated ad impressions.

How to enable lazy load on your WordPress site

To use lazy load for ads, you first need to install and activate Advanced Ads Pro. Afterward, you can enable this module in the Pro settings of Advanced Ads.

When the lazy load module is activated, you can define when the ads should begin to load. Set the number of pixels before they are visible on the user’s screen. In the last step, the function must still be activated for the placements where you want to load your ads deferred. That’s it!

Improving your page speed isn’t that hard. You can start enhancing your site with Advanced Ads Pro today!

*Prices include support and updates for one year. You may cancel at any time.